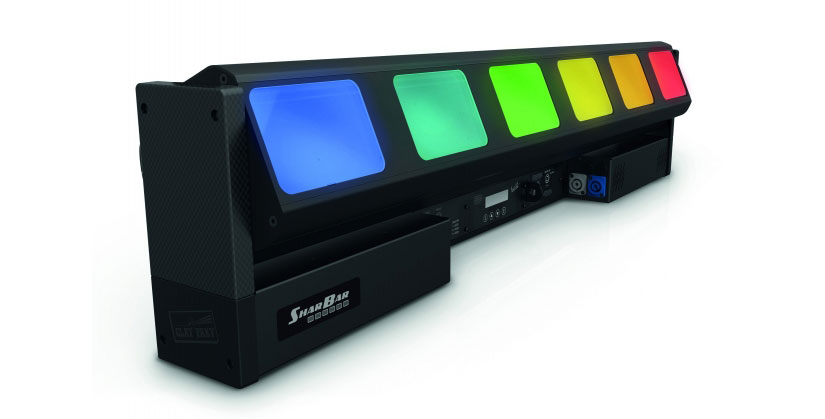 It has six brand new OSRAM Ostar RGBW LEDs with a power rating of 30W, but taking up the same amount of space as an old 10W LED.

This moving LED is equipped with a motorized optical zoom capable of minimum beam angle of only 2 °. Thanks to its excellent lenses, the SharBar can be used to create sharp light effects when projected on any surface. There is no comparable LED bar able to produce a similar effect.

However, this is not the only novelty. The optical unit coupled to each LED consists of a motorized system with double mirror. That means that each beam can be directed independently of the others. Also, each of the six light beams can be moved or locked within the range of 60 ° (+/- 30 °). Thanks to the extraordinary, original optical unit, LED bar produces an effect similar to six independent lights, which can work synchronously or asynchronously with mutual compliance.

SharBar has RGBW color mixing, linear CTO, 0-100% dimmer and 24 Hz strobe, all of which provides a truly innovative lighting effects. A powerful light output is very concentrated, or on the other hand, and following lighting requirements, can be diffused. It is compact and durable, and its weight is only 15 kg.

Despite being completely new to the market, thanks to the partnership between Clay Paky and Studio Berar, we are able to deliver this moving LED. For any questions you can contact our sales team.