You are here:
AudioConference systemsReferences 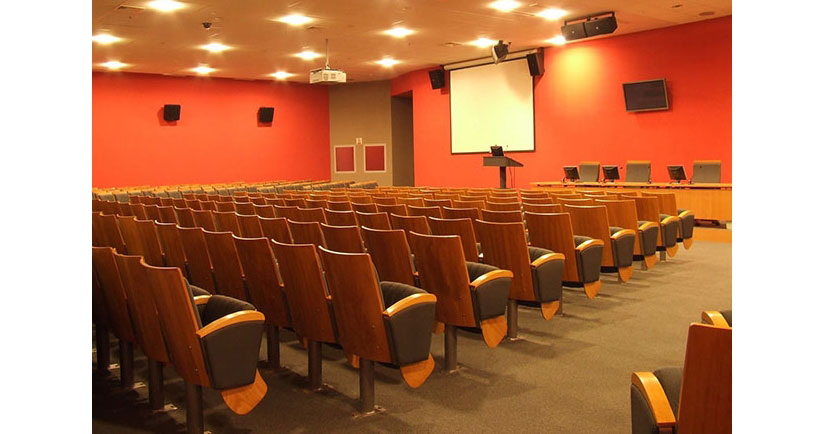 The Master Center of Novi Sad Fair, the convention center of the building and the B4 – Entrance Hall, have been equipped with multimedia-conferencing system and a ambiental sound system, which are then coupled into a single entity – the central A/V system.

Convention Center is composed of one large and six small rooms that can be connected in a variety of ways. Therefore, the system implemented in this part of the building is also modular. Each signal in the center of the Master, no matter where it comes from, can be played anywhere, including many places at once. This ensures complete modularity of the system.

The heart od the audio system is digital audio matrix BSS Audio Soundweb London. All the sources are connected through it to the ambiental sound system, as well as the master outputs from all rooms. Also, it determines in which hall the signal will be sent.

Each small room has 6 built-in two-band JBL Control 24CT speakers which are amplified by two-channel CROWN CTS 600 amplifiers. Their purpose is additional sound coverage of the person who speaks.

So-called central sound system is composed of active dual-band speakers JBL EON G15 on stalks, which are placed to the left and right side of the speaker. In this way, it makes sound spread evenly throughout the room and therefore it is very user-friendly, with no intense sound coming from the front, so the source of the sound can easily be identified and the listeners’ attention can be focused exclusively on him or her.

The person who speaks on the platform uses electret microphones (AKG GM30ES with CK31 capsule) that are placed on the podium on anti-vibration mount with XLR connector, which provide increased isolation of the microphone from harmful vibration and shock.

For the purposes of the tone-masters in the cabin overhead, there is microphone CROWN PCC-160. Two additional AKG WMS 4000 UHF “diversity” wireless microphones – “handheld” and “lavalier” – are used for questions from the audience during presentations.

Signals to the speakers and microphone at the presidency table are lead to microphone input by audio mixer Soundcraft Spirit M12. There are also two active monitor speakers JBL LSR4326, so technician could easily follow the session.

As for the video system, so-called multimedia presentation system in the rooms is designed for all kinds of presentations with video and / or computer program material (eg, computer graphics, animated presentations, etc). System in one of the halls is composed of professional projection systems, program sources, the main system selector and monitor devices for the preparation and control of the program.

The projection system is composed of motorized projection screens Da-Lite Cosmopolitan Electrol with 100-inches diagonal, positioned in each small room, with two projection screens Da-Lite Cosmopolitan Electrol with 120-inch in the great hall, which are placed on the front wall of the room. One video projector Sanyo PLC-XF60 is set in each small hall, while two placed in the great hall. Projectors are installed under the ceiling at the halls, on the metal brackets. They are very quiet, with no interferention with holding conferences and congresses. The projector works with a resolution of 1024 x 768 dots (XGA).

B4 – The Entrance Hall

Audio/video system at the Entrance Hall of the Conference center, is composed of two separate parts that can operate both separately or together.

The core of the audio system is also digital audio matrix BSS Soundweb London. In addition to the audio matrix, there are built-in dual-band ceiling JBL Control 24CT speakers amplified by Crown CTS 600 or 1200 amplifiers, depending on how much power is required for each line. At the ground floor lobby, right in the front, JBL Control 29 AV speakers are amplified by two CROWN CTS 2000 amplifiers.

Thanks to the AKG D542ST/ S microphone call station, it is possible to send any notice to visitors of Master center, wheter evacuational or informational purposes.

Video system (multimedia-presentation system) at the lounge, as in convention centers, is designed for all kinds of presentations with video and / or computer program material (computer graphics, animated presentations etc.). The system consists of a professional projection system, program sources, the main system selector and monitor devices for the preparation and control of the program. 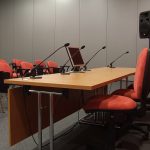 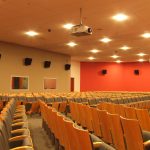 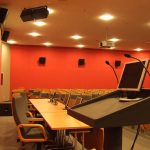 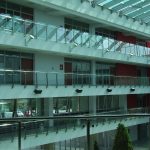 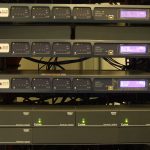 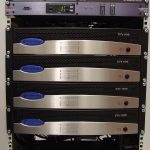 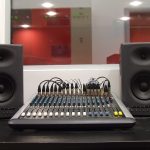